What are Active Directory Groups?

Active Directory groups are methods for collecting users, contacts, computers, and even other groups’ objects within Active Directory so that you can manage the objects in the group as a single unit.

Objects that belong to a particular group are referred to as group members. Using groups can simplify the permission administration by assigning a set of permissions to a security group once, rather than assigning permissions and rights to each group member individually.

Active Directory has several built-in groups that you can use to assign users or computers too, so they have the permissions they need to get their jobs done. You can also create your own groups and assign those groups various levels of access and permissions. Active Directory enables administrators to manage all objects and services from one centralized location rather than having to go from computer to computer to get things done. Many other programs can tie into Active Directory to manage user accounts and other objects as well. 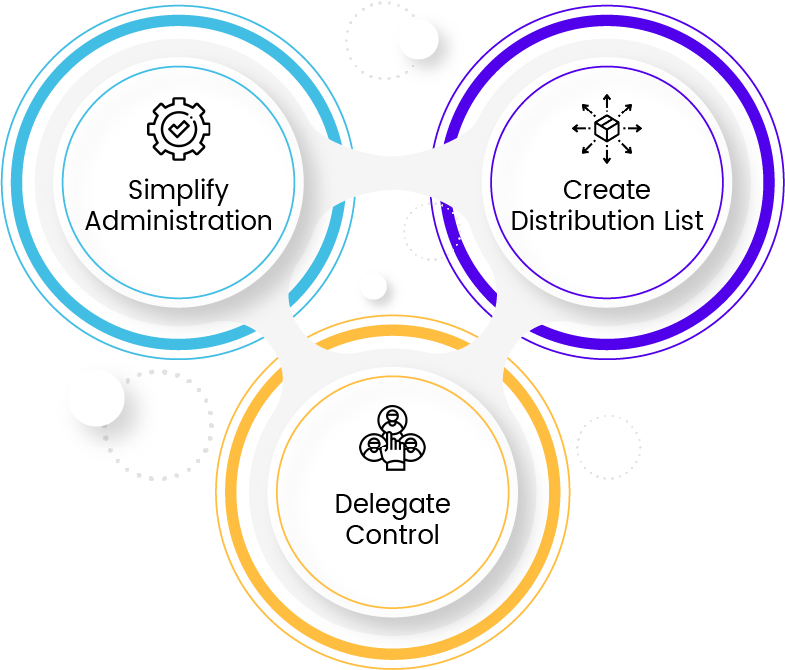 To simplify administration by assigning share (resource) permission to groups rather than individual users in the active directory. When you assign permission to a group, all its members have the same access to the resource

To delegate the control by assigning user rights to a group using Group Policies. In the future, you can add new members to the group who need the permission granted by this group.

One of the major use of groups with in active directory service is to create email distribution lists.

In Windows, there are seven types of active directory groups  that involves two domain group types with three scopes in each and a local security group as follows:

We were demonstrating how to manage the creation and automation of Active Directory security groups and distribution lists before we realized that we had no idea what the differences were between the types groups: security and distribution groups, and the group scopes: universal groups (UG), global groups (GG), and domain local groups (DLG).

With a little work, we dug out enough info for this cheat sheet on Active Directory groups:

Used with care, security groups provide an efficient way to assign access to resources on your network. Security groups have two main functions:

By granting permissions to security groups on shared resources, IT administrators allow group members to access the company’s resources, like shared printers, secured folders, and financial records. For example, the Human Resources security group will have access to employees’ data, which is confidential and cannot be shared with other departments.

When setting up a security or distribution group you will also need to choose a scope for that group so Active Directory knows how to assign the permissions to the resources that group is allowed to access. Groups, whether security groups or distribution groups, are defined by a definition that identifies the scope to which the group is applied in a domain or forest.

There are three group scopes in active directory: universal, global, and domain local.

Following differences between Group Scopes are generally defined, but they may be subjective to each use case.

Universal Scope groups are used for consolidating groups across domains. The best practices recommended to consolidate groups are as follows:

Using the above two steps prevents any change in groups with universal scope even with the change in users’ memberships within groups with global scope. Moreover, adding or removing a user in a group triggers replication at different levels depending upon the type of group. For example:

Use Case for Universal Groups

However, linked-value replication (associated with a change in Domain linked attribute) leads towards replicating the change in attributes of universal groups (modified membership) only into global catalogue server, provided that the windows server 2003 or higher is a forest’s functional level.

Use Case for Global Groups

Consider a network with two domains Asia and United States. In Asia, we have a group with global scope USA/GGMarketing. Considering GGMarketing groups have certain rights and permission associated with them in the USA domain and we want to provide user members in those groups with the same rights and permission in Europe as well. To achieve that, we will create GGMarketing in the Europe domain as well. Thus, applying such a group in the European domain is an example of logical groups management.

When to Avoid using Global Groups?

Domain local groups would also include other groups to enable other members to get permissions that the group has assigned.

Use Cases for Domain Local Group

Domain local scope groups enable IT in defining and managing access to resources in a single domain. All user accounts can be added to a list of resource permissions. Let’s consider different use cases.

You can change the  scope or type of directory groups, but there are several conditions as follows: 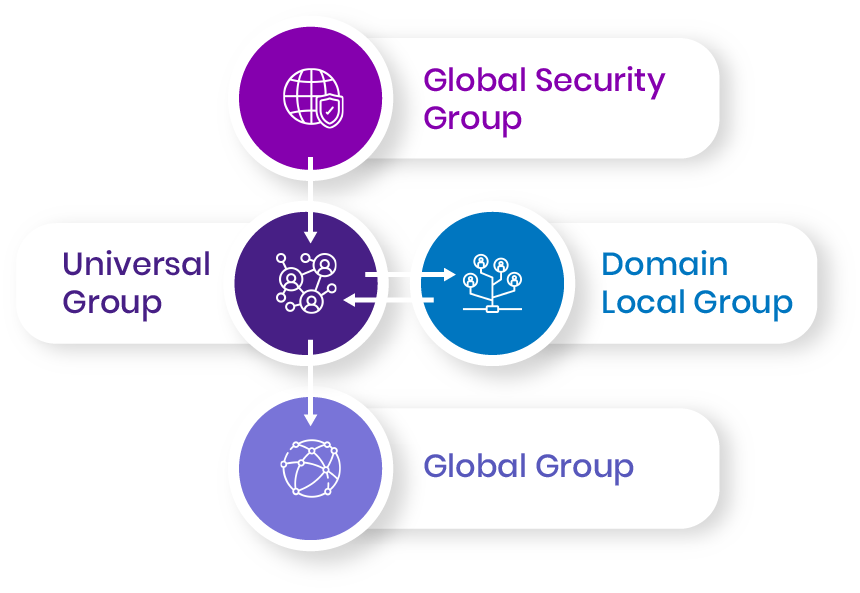 You can convert a global security group to a universal if the group is not part of another global group.

A universal group can be converted to a local domain group without any restrictions.

There are some additional groups that are formed in Built-In and Users containers of a domain, such as:

Below each of these well-known default security groups are defined:

Administrators, a default active directory group has control over all domain controllers and associated data. Such groups can modify memberships of other Active Directory default groups such as Domain Admins, Enterprise Admins, and Schema Admins.

Backup operators are primarily responsible for backing up and restoring all files on a computer, irrespective of permissions concerning those files. Such active directory groups can’t be:

Members of the Backup operator’s group do not have the ability to:

However, such group members do have the ability to replace files such as OS files on DCs.

Remote Desktop Users refers to a group designated to provide users and groups rights to initiate a remote session to an RD session host server. This group can’t be:

Remote Desktop Users appear as SID unless the following two conditions are met:

Enterprise admins Active Directory group has full access to all domain controllers and it is a member of the Administrators group. Moreover, it owns a directory configuration partition along with control for domain naming context.

Such pre-defined groups in Active Directory can be used in the following two ways:

EXAMPLE: An example of such privileged access would be a group named Back up Operators, which would have access to backup files and folders across domain controllers within a specific domain. Hence, when you add a user to a group, the user inherits all the group’s user rights as well as all the group’s permissions for any shared resources.

Default groups can be found in the built-in container and the user’s container in Active Directory Users and Computers in the following way:

Movements of such groups within these containers are only limited to other groups or OUs (Organizational Units) within domains.

Objects within Active Directory employ security descriptors for controlling access. Security descriptors are primarily used to store information regarding permissions. A background process is initiated periodically to apply a security descriptor to protect groups such as administrative groups along with members within those groups. Any unauthorized attempt to edit such descriptors with respect to groups will be overwritten.

The AdminSDHolder object contains the security descriptor. If we are looking to change the permission on any of the administrator’s groups, it is considered important that we change the security descriptors on AdminSDHolder. However, it is also essential to be cautious while making those changes since we are modifying settings across protected administrators’ accounts.

Hi Edward, I think your description of the difference between types of AD groups is accurate; but it is incomplete in that it does not explain why there would be different types of groups anyway, or what you should use them for. Let’s try a short indication: To give users access to resources/objects, you could in principle put user accounts directly into the ACL’s of the objects (files, printers,…) they need to use. Because of the number of users and objects in any non-trivial organization this would lead to an administrative nightmare. That is why security groups were introduced, as… Read more »

Jacque, that is excellent, thank you.

Good.. i got sme ideas

excellent …. you explained the difference between those three Active Directory groups very well i found your article short and easy to understand thank you