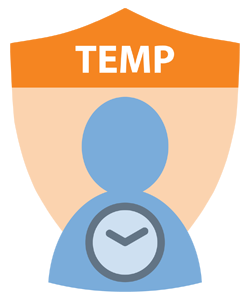 In some ways, there is no greater threat to security than a temp employee. At first glance, the previous statement might not make much sense. After all, the temp has comparatively the least amount of privileges, and they have those privileges for only a short period of time.

In reality, however, the accounts created for temp employees are typically the most forgotten, potentially exposing your organization to unwanted access by users who, by definition, have little or no loyalty to the organization. Without the proper tools and procedures, former temp employees who should no longer have access may take advantage of the access granted, making them an insider threat.

During a temp’s time at your organization, there are three points or events at which security concerns come into play:

The underlying problem here stems from a lack of group management, exacerbated by the undefined nature of the “needed access” that temp employees require.

So, what are you supposed to do to ensure that temp employees don’t remain a security risk?

There are three basic steps that you should consider to create a more secure environment for all employees — temps, contractors, and full-timers alike:

It’s important to remember that people with high-profile positions are not the only people who need to have their security put under scrutiny. In reality, anyone given access via groups — especially when IT has no idea what rights have been granted — needs to be under the security microscope.